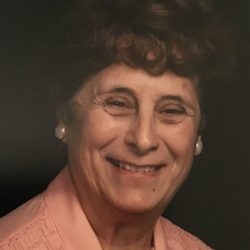 According to her wishes, her cremated remains will be inurned beside her husband in Arlington National Cemetery at a later date.

Angela Katherine DeFino Picariello, 100 of Spotsylvania County, peacefully departed this life for her heavenly home, on Sunday, August 30, 2020.  She was being cared for at the Hughes Home in Fredericksburg, VA. Born February 28, 1920 in New York City, Angela was the daughter of the late John and Catherine DeFino.  Angela was preceded in death by her husband of 50 years, Ralph E. Picariello, and her infant son, Ralph Alexander.  She is survived by her sons, Ralph Carmen (Joan) Picariello of Stafford VA, and John (Valerie) Picariello of Spotsylvania County VA; her sister, Rose Bricca of New Milford, NJ; her six grandchildren, Angela K., John, Robert, Angela R., Jacqueline and Tisa and her ten great grandchildren, Anthony, Madison, Donavan, Everleigh, Milaney, John-Michael, Parker, John, Shelby and Julian, and numerous nieces and nephews. Her life goal was the comfort and well being of her family to whom she was devoted. She was also preceded in death by her two brothers Anthony and Alex DeFino, and her two sisters Lucy DeFino Zaccaria and Marie DeFino. According to her wishes, her cremated remains will be inurned beside her husband in Arlington National Cemetery at a later date. The family requests that in lieu of flowers or memorial contributions, you spend quality time with your loved ones. Online condolences may be left for the family at www.storkefuneralhome.com.