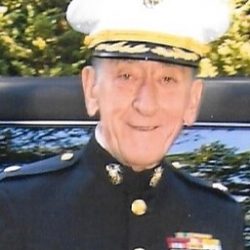 Funeral Mass: will be held in the Chapel at Fort Myer, VA with final resting place in Arlington National Cemetery, 1 Memorial Drive, on February 11, 2020 at 12:45 PM

Lieutenant Colonel Arthur Warnack, USMC (Ret.) died peacefully in his Reston, VA home on October 27, 2019 at the age of 82.

He was born July 10, 1937 in Detroit, MI to Leo and Anna Pollak Warnack, the youngest of seven children. He joked that he had no middle name because his parents had used them all already. Art enlisted in the Marines in 1955, where he proudly served until retiring in 1986. He rose from the enlisted ranks to eventually become an officer, a rare breed known as a “Mustang.” He often said that he owed everything to the Corps, because they made him the man he was. He was a very fine man. Semper Fi.

Art was a loyal Marine, as well as a loving husband, father, grandfather, brother, uncle and friend. While serving as a Drill Instructor at MCRD San Diego, he met Carol Askey and they married in 1958. Their daughter, Chana, was born in Quantico, VA in 1961, a “Marine brat” from the start. Over the course of his career, he, and sometimes family, was stationed at San Diego, Quantico, Yuma, Viet Nam, El Toro, HQMC, Kaneohe, Iwakuni, Okinawa, Cherry Point and Beaufort. Art was a Drill Instructor, Air Traffic Controller, PMO officer, XO, CO and for a brief time the fox guarding the hen house as a Director of the Clubs at Kaneohe MCAS. After he retired, he continued his work in the private sector and at the FAA.

After Carol died unexpectedly in 1979 in Kanehoe, Art married Jennie MacDuff. They loved their house in Cape Carteret, NC, often dropping a canoe off their deck, to paddle the Sound. They amicably separated in 1995. He then met Norma Zorrilla and married in 2000, to spend the rest of his life with his last beloved. They danced and shared their love to the very end.

Throughout his life, he loved music, and never failed to dance if “Proud Mary” was playing. He loved going to the Nutcracker ballet at Christmas with his dearest friends Roger and Deborah Timpson, where he never failed to take a long nap after intermission.

He loved his Detroit and Michigan teams, and delighted in making football bets  with his grandson Nicholas.

He shared a special bond with his daughter Chana, especially after losing their linchpin Carol. Humor was their main method of communication, and they never missed a chance to reference a quote from Mel Brook’s “Young Frankenstein.” Art’s last independent call to Chana was to leave a message where he said “Ajax Liquor Store?” If you’d like to see what he meant, you can hear it at https://www.youtube.com/watch?v=qoPXzsOcaxs

He is survived by his wife Norma Warnack; his daughter Chana and her husband Jim Jackson; his two grandsons Nicholas and Ryan Jackson; his stepsons Juan Carlos Gutiérrez (Carolyn) and Miguel Gutiérrez (Tara) and their children Alex, Luke and Mateo; sister Barbara Macy and numerous nieces and nephews. He is preceded in death by his first wife, Carol; second wife Jennie and his five brothers.

The family heartfully thanks Vitas Hospice Care; Deneen Palmer for her respectful care of “the colonel” and all the doctors and nurses who provided so much attention to Art’s well-being. Donations in Art’s memory may be made to Braille Institute Santa Barbara, brailleinstitute.org.

A funeral Mass will be held in the Chapel at Fort Myer, VA with final resting place in Arlington National Cemetery, 1 Memorial Drive, on February 11, 2020 at 12:45 PM.

Online condolences may be left for the family at www.storkefuneralhome.com and update funeral dates will be posted there as well.