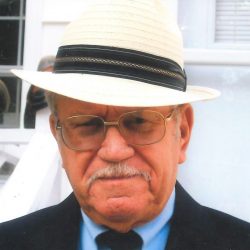 Clarence O. Reynolds, fondly known as “Scoots,” was born on July 10, 1927, to the late McKinley and Pearl B. Reynolds, in Caroline County, VA. Scoots departed this life on Tuesday, November 26, 2019 at the home of his niece, Sandra C. Ware, and her husband, Earl T. Ware, in King and Queen, VA, where they welcomed him into their home and were very dedicated in their care for him for a number of years.
Scoots accepted Christ at an early age, and was baptized as a member at St. Stephen’s Baptist Church, Central Point, VA. In later years, he rededicated his life to Christ and joined New Hope Baptist Assembly Church in Essex County, where he remained a faithful and loyal member until his death. Scoots attended school in the public school systems of Essex and Caroline Counties. Scoots enlisted in the United States Army and part of his service in the military was during the Korean Conflict. While in the service he made the rank of Corporal and received an Honorable Discharge. Scoots married his childhood sweetheart, Arlene “Boots” Byrd. They built their home in the same community in which they grew up, and lived there until “Boots” became ill and succumbed in August, 1989.
Scoots was employed at a number of jobs in his young life to include, snaking logs at Byrd’s Sawmill; worked for farmers, P. E. Boyd Byrd and Clarence Tignor; and his last job was at Ft. A. P. Hill in Bowling Green, VA for over 20 years.
Scoots enjoyed fishing, gardening, and hunting. He enjoyed going out on the boat with his brothers, friends, and sometimes would even take his nieces and nephews and teach them to master the sport! He planted two huge gardens every year for many years and supplied his family and neighbors with many delicious vegetables of the season. His favorite sport was hunting. He raised and owned Walker Hounds and Beagles for many years and as he would say, “they were the best dogs in the entire club!”
To characterize his personality, Scoots was humorous and enjoyed making people laugh at his wit, jokes, and his very own language and made-up words and songs. He had many friends in the neighborhood, at work, and in his hunt club. Many of his hunting buddies would start the hunt day at Scoots’ house, and that’s where they would end up after the day’s hunt. Scoots was a kind-hearted person and would willingly do what he could to help anyone that needed it. He loved children and enjoyed playing with his nieces, nephews and the neighborhood children. Hard work, a good attitude and love for his family and the Lord were some of the attributes he will be remembered for.
Scoots was preceded in death by his wife, Arlene “Boots” Reynolds; his parents, McKinley and Pearl Reynolds; two brothers, Joseph T. Clarke and Algia B. Clarke, Sr.; his sister, Glassel R. Clarke; two sisters-in-law, Sydney R. Reynolds and Lillian R. Clarke. He leaves to cherish his memories, 2 brothers, Everett “Buck” Reynolds of Milford, VA.; and William “Bill” Reynolds (Lilly) of Richmond, VA.; eight nieces, Susie Clark of Richmond, VA.; Florence Hodges (Van), of Fredericksburg, Va; Sandra Ware (Earl), of King and Queen, Va; Rebecca Clarke and Glenda “Buzzie” Rinaldi of Milford, VA; Carla “Mike” Mullen of Philadelphia, PA; Dena Currie of Richmond, VA.; and Wanda Fortune (John), of Spotsylvania, VA; three nephews, A. Bernard Clarke, Jr. (Helen) of Chesterfield, VA.; Michael L. Byrd (Sonya) of Milford, VA, and Ken Reynolds, of Richmond, VA, a God-daughter, Carly T. Celesky (Gregory) of Spotsylvania, VA; two special young ladies that affectionately referred to him as their “Ba-Ba,” Sarah and Hannah Mundy of Milford, VA, a host of grand nieces, grand nephews, cousins and friends.
A funeral service will be held on Monday, December 2nd at 2:00 pm in New Hope Baptist Assembly, 1823 Crittenden’s Mill Road, Tappahannock, with burial to follow in St. Stephens Baptist Church Cemetery, Central Point. The family will receive friends at the church, two prior to the service. In lieu of flowers, memorial contribution may be made to New Hope Baptist Assembly, c/o Jason Fortune, treasurer, 883 Popeman Swamp Road, Tappahannock, VA. 22560. Online condolences may be left for the family at www.storkefuneralhome.com.