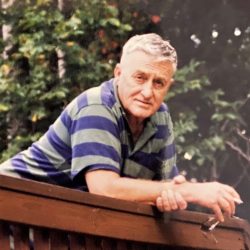 Jesse James Martin, Sr., 91, of Bowling Green, gained his wings to eternity the morning of June 26, 2020. In his words, “it is time to fly away from here.” He was known to most as Jesse or JJ. That is, unless you were one of the few who were privileged enough to call him, “Papa.” He is survived by his wife of 69 1/2 years, Barbara Martin. If you were to ask Barbara, she would say that most of those years were “pretty good!” Jesse was number nine of fourteen children.  He was a devoted member of the armed services. He served his country in both the Air Force and the Army, before being honorably discharged. Jesse was an avid outdoorsman, a hunter, and fisherman. He was a founding member of the Clifton Hunt Club and retired as a civilian employee from Fort A.P. Hill.  He was a hard worker, a family man, but more than anything, he was a storyteller. He never met a person he didn’t mind talking to. He also never met a person that he didn’t have an issue speaking his mind to. If he talked to you, he liked you. If he cussed you, he loved you. And, he loved a lot of people.

Jesse was the patriarch and guiding footprint for many. He is survived by a loving family that will continue to carry on his memory. Survivors include his wife, Barbara Martin; three children, Agnes Arnold; Tinker Martin (Patty) and Teresa Satterwhite (JD);  two sisters, Alma Collawn and Ruby Martin; a brother, Peter Martin; eight grandchildren, Jason Jarrell, Sara Newton, Lindsey Martin, Ryan Martin, Megan Russell, Logan Satterwhite, Mallory Ganoe and J.J. Martin III; nine great grandchildren, Shipley Newton, Cabell Newton, Ellie Newton, Avery Grace Satterwhite, Eli Russell, Olivia Russell, Aubrey Russell, Ford Satterwhite and Sully Satterwhite. He was preceded in death by two sons, Jesse J. “Brother” Martin, Jr. and infant, Jerry Martin. Forever missed, but undoubtedly never forgotten. A funeral service will be held on Thursday, July 2nd at 2:00pm in the Bowling Green chapel of Storke Funeral Home, with burial to follow in Greenlawn Cemetery. The family will receive friends at the funeral home, one hour prior to the service. In lieu of flowers, memorial contributions may be made to the Bowling Green Vol. Rescue Squad. Online condolences may be left for the family at www.storkefuneralhome.com