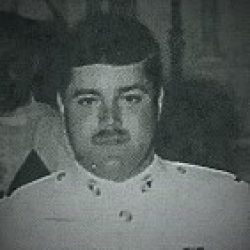 John F. Leino, formerly of Alexandria, Virginia passed away suddenly on August 2, 2019. Born in Chisholm, Minnesota he grew up on a dairy farm in Brule, Wisc. In 1967 John attended the University of Notre Dame where he walked on as linebacker in varsity football under his idol, Coach Ara Parseghian. He was also a ferocious member of the Notre Dame Rugby team who travelled to Ireland to play their national team. After graduating from Notre Dame in 1971 he entered the Marine Corps where he served as an infantry officer and attained the rank of Captain. John attended George Mason Law School and graduated in 1978. He was a principle partner in the law firm of Howard, Leino and Howard in Alexandria, Va. where he successfully represented many defendants in high-profile criminal trials. Many of his clients were veterans, and he would fight for them against large corporations pro bono. One of his most successful cases was when he represented Marine Cpl. Lindsey Scott in appeal and subsequent retrial at Quantico Marine Corps base from 1983-1988. The case was the subject of appearances on 60 MINUTES, a book and an HBO movie entitled DANGEROUS EVIDENCE. John represented individuals successfully at felony jury trials in the State and Federal Court for over 30 years which included drug cases, murder, kidnapping, rape and armed robbery and arson. His law firm took pride in representing the “little man” against large corporate and government interests. After the Edmund Fitzgerald left Duluth, Minn. and sunk in Lake Superior, he wrote the inscription for the Seamans’ Memorial on Barkers Island which was dedicated to all those men who have lost their lives on the Great Lakes. He is survived by his wife Patricia.

The family will receive friends from 6 to 8 pm on Tuesday at Storke Funeral Home, Colonial Beach Chapel. A Mass will be held on Wednesday at 10 am at St. Dominic Catholic Church in Washington, DC with interment to follow at Quantico National Cemetery.