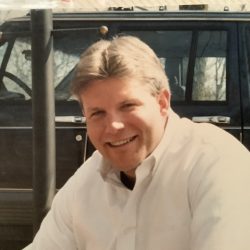 John Gordon Wetherill, 62, of Ruther Glen passed away on Monday, February 24, 2020, in the comfort of his own home.

Born in Norfolk, Virginia and raised as an Army brat he was given opportunities to see different areas across the globe for a lifetime of experiences.

In his early years, John graduated from Ferrum University, Ferrum VA, worked at Norfolk Marine during the summer, but found his true love by becoming a 15-year veteran ski instructor at Wintergreen Resort, Wintergreen, Virginia, during the winter seasons.

Throughout his career, he worked in various sales-oriented fields and found his ‘work home’ with the Prince William County Fire and Rescue Department in Virginia.  He retired from the department in 2016.

John had a passion for jazz music, skiing, and motorcycles.

A funeral service will be held on Saturday, March 7, 2020, at Storke Funeral Home, Ruther Glen VA  at 10:00 am. Donations can be sent to Fire and Iron Station 25 (fireandironstationmcstation25@gmail.com, “In Memory of John Wetherill) and Wintergreen Fire and Rescue.