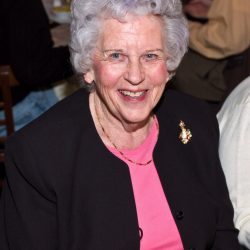 Precious in the sight of the LORD is the death of His saints.—Psalm 116:15

Olive Elizabeth Edwards King left this world October 9 surrounded by her family in 13 days after her 99th birthday. She was the oldest member of Shiloh Baptist Church in King George. She was born September 26, 1920, to John and Maude Frank Edwards at the Frank Family homeplace, Graball, in Welcome, in King George.

Ollie attended first grade in a one-room school at Welcome. Later, her schoolteacher mother taught her along with some local children and cousins, in her home during the Depression years. In her early years, her passion was horseback riding. Her favorite horse was Bessie.

Ollie was graduated from King George High School in 1938, along with Mary Burnley Owens, now Shiloh’s oldest member. Ollie then moved to Washington, D.C., to experience city life. During that time, she began dating James King, who won her over with his musical talents, playing the mandolin and guitar, entertaining all of Washington, D.C., and half of King George.

Ollie married movie star-handsome James in 1941. Soon after, son, Larry, was born. Toward the end of World War II, James joined the U.S. Marine Corps. Ollie packed her bags, and she and Larry headed for the Marine Corps base in Parris Island. Christmas Eve of 1944, James was shipped to Guam. Ollie moved back to the Edwards Family Farm down at Booms Hill to the home built by her grandfather, George Arnold Edwards, who was son of John Arnold Edwards, a schoolmaster in King George who died in Richmond January 1864 of injuries sustained in a skirmish at Brandy Station during the Civil War.

Ollie and James were part of The Greatest Generation. James died in 1975, and Ollie, the survivalist, held the family together. She continued her accounting profession at the Naval Surface Warfare Center from where she retired in 1980 and raised her Grandson, Chris. She enjoyed the family hunters, keeping them nourished with her specialty, venison barbecue, and giving them a place to congregate at her pre-Civil War home on Greenlaw Way.

In later years, Ollie’s passion was cruising with her beloved friends and travel agents, Bud and Sally Budnick. Her last cruise was to Bermuda with her cruise mate, Jean Shanklin. Bud and Ollie journeyed to heaven one day part.

Ollie leaves behind her cherished friends, Jean Shanklin and Betsy Lofton, who lovingly cared for her many years.

In lieu of flowers, contributions to Ollie’s memory may be made to The Shiloh Baptist Church Ramp Fund, 13457 Kings Highway, King George, VA 22485.  Condolences may be left for the family at www.storkefuneralhome.com.