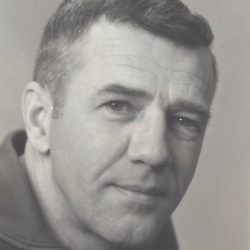 Rev. Ray Kenneth “Kenny” Brooks, 87, passed away at home on Saturday October 3, 2020 surrounded by his loving family after a long battle with dementia.

Kenny was born on February 17, 1933 in Charlottesville, Virginia.  He grew up in Fredericksburg and graduated from James Monroe High School in 1950.  He worked at Wilson Brothers until 1953, when he was drafted into the U.S. Army.  He did basic training in Kentucky at Fort Knox, was stationed in Germany for four years and finished out his time in the U.S. as a drill instructor.  He was proud of his Army service, often recounting adventure and mischief that he and his squad got into while overseas.  After that, he returned to Fredericksburg and also Wilson Brothers, working there until his retirement after 39 years in 1993.  He worked his way up through the company from sales, where he did plans and take-offs for many area homes, to a time as vice-president and general manager, to a time as head of the door and window shop.  It was through Wilson Brothers that he met Anne, who became his lifelong helpmate.  The marriage to Anne brought along four daughters, two from Anne’s first marriage, one from Kenny’s first marriage, and one daughter together.

Kenny was raised in the Methodist Church and served there for much of the early part of his life. He served many years with The Gideons International.  He studied at the Fredericksburg Bible Institute, where he finished with a Doctorate of Theology.  During that time, Kenny experienced God’s call into the Gospel ministry and he was ordained in 1984 by the Fredericksburg Baptist Association. He was a bi-vocational pastor from then until 1993 when he retired from Wilson Brothers. He served as associate pastor at Crossroads Baptist Church under Dr. G. Albert Brown for ten years.  He was then called to pastor Montague Baptist Church in King George, and served there for eight years.  Following that, he led Calvary Pentecostal Church, a small congregation in Fauquier County.  Throughout that time, he taught classes on the Old and New Testament at the Fredericksburg Bible Institute and also served as treasurer for 20 years and on the Board of Directors for 25 years, concurrently.  His ministry continued into retirement as he maintained active nursing home and hospital ministries, as well as officiating funerals for many local funeral homes.  Kenny loved Jesus and treasured his time serving Jesus and wanted to be sure that everyone he knew and met was introduced to Him.

The family would like to thank John, Paul, Darlene, Felicia, Valerie, Lakeisha and the staff of Capital Caring Hospice, as well as caregivers Meghan, Precious, Vicki and the staff of Virginia Home Care Partners.  In addition, numerous family members and friends spent countless caregiving hours dedicated to keeping Kenny and Anne together in their home as his dementia progressed.

The family will receive friends Monday, October 12 from 6pm to 8pm at Mullins & Thompson Fredericksburg Chapel.  A celebration of Kenny’s life and a time of worship will be held at Spotswood Baptist Church Tuesday, October 13 at 12 noon, with Dr. Dan Cook officiating.  The use of masks and social distancing will be followed in accordance with state mandates.  The service will also be livestreamed on Storke Funeral Home’s Facebook page, “Remarkable Lives.”  Interment will follow at Oak Hill Cemetery.  A reception will be held at a later date.

In lieu of flowers, donations can be made to The Gideons International for the distribution of Bibles throughout the world – www.gideons.org