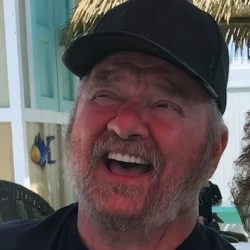 Born in Washington, DC, a son of the late Richard O. and Betty Courtney Overby, he had worked as a carpet installer. He was a member of American Legion Post #148. He enjoyed old cars, loved music, played guitar and bowled. He cherished time spent with family.

Among his survivors are his fiancé, Brenda Irvine; daughters, Julie Overby and Kim Sudduth; grandchildren, Kinsley and Kasen Sudduth; brother, Frank Overby; brother-in-law, Butch Hackenson; several nieces and nephews and granddogs, Sophie and Sadie. In addition to his parents, he was predeceased by son, Joey Overby, brother, Donnie Overby and sister, Gail Hackenson.