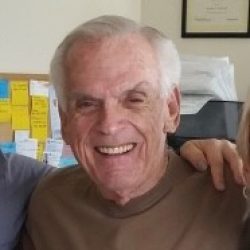 Born October 11, 1942 in Washington, DC to the late Albert B. Speight and Carolyn Eader Speight. Bill departed this life November 11, 2020. He grew up in Arlington, VA and later moved to Fairfax, VA in his young adult years.

Bill began his career and worked for many years as the Sears Auto Service Manager in Landover, MD. In 1984 he purchased his first Midas Muffler franchise in Fairfax, VA. He subsequently purchased three additional franchise locations in Burke, Chantilly and Leesburg. In 1986, Lake Braddock Secondary School presented Bill the Employer of the Year award for their Workforce Mentor Program. All of his shops participated in the nationwide Project Safe Baby Program which encouraged the purchase and safe installation of child car seats, subsequently leading to an invitation to meet President Clinton and the First Lady at the White House. Bill was recognized as the 1996 Midas Muffler Best of the Best – North East Division Dealer of the Year for his solid business and financial performance, also noting his ability to attract the best employees and empower them to operate for success.

Bill was an avid boater, known for the colorful graphics on his many power boats. He and Lynn boated around the Potomac River, Chesapeake Bay, Atlantic Ocean and Intracoastal waterways of southern Florida.

As a collector of antique muscle cars, Bill participated in many car shows throughout Virginia, winning multiple awards. He achieved a dream of participating in the Barrett-Jackson Car Auction entering his 55 Chevy Nomad.

Like many local Washingtonians, Bill was a devoted Redskin fan, attending all home games at RFK stadium, Jack Kent Cooke Stadium/FedEx Field and two Super Bowls. He built “Bill’s Redskins Lounge” in his family room in which he hosted many football watch parties.

A private family service will be held on Saturday, November 21 at St Mary’s Episcopal Church in Colonial Beach, VA.  A celebration of Bills life will take place when COVID restrictions are lifted.

In lieu of flowers, memorial contributions may be given the Colonial Beach Rescue Squad or Fire Department or an animal rescue of your choice.

Condolences may be left for the family at www.storkefuneralhome.com.