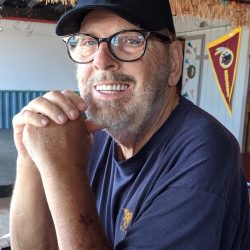 To be announced at a later date.

Born at Ft. Belvoir, he grew up in a military family. Bill also served his country by serving in the United States Air Force and then with the Washington DC Air National Guard. He retired after a 38-year career with the Central Intelligence Agency. He and his family lived and served all over the world. After retirement, he made his home at Ebb Tide Beach where he was active in his community, serving as the Association President.

He is survived by his wife, Jeanette L. M. Baker; his children, Courtney Kane (David) and Stuart W. Baker (Rachel Thompson); his sister in law, Susan M. Joiner; his cousin, Deborah R. Stiltner as well as numerous other cousins, his beloved friends, Mike and Michelle Latham and his cats and dogs.

Bill’s wishes were to be cremated and his remains entombed in Arlington National Cemetery. Those services will be announced at a later date. In lieu of flowers, memorial contributions may be made to the Virginia State Police Association, 6944 Forest Hill Ave. Richmond VA 23225. Online condolences may be left for the family at www.storkefuneralhome.com.