A while back a friend said to me, “When I die, I don’t want my friends to be sad like a lot of funerals are. I want them to celebrate my life. I want a big party and everyone there to remember me for the full life I had.”

Storke Funeral Home has three locations that offer traditional and non-traditional services and facilities.Two of our funeral homes (Bowling Green and King George) 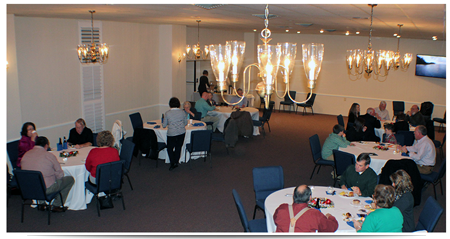 have formal chapels with wooden pews that offer families a service that has the feel of something you would experience in the sanctuary of a church.

At our Colonial Beach location, we completely remodeled and removed the pews, organ and pulpit area. We took out a wall that separated the front portion of the chapel from a side room that was being used for storage. We installed new elegant chandeliers and put white plantation shutters on the inside of the windows that extend from the floor to ceiling. Fresh paint and new carpet have turned this, once traditional funeral chapel into a more flexible “event” space. If a family desires, we can set the room up with comfortable, padded banquet chairs to accommodate over two hundred. The side room off the front of the space can be set up with chairs for private family seating. Or, the entire large room can be left wide open, with no chairs, for easy flow during a visitation. 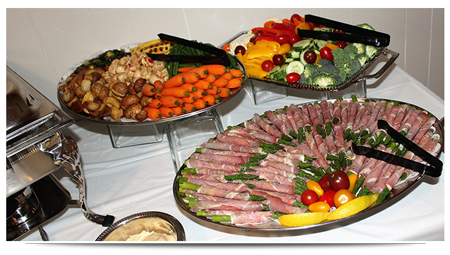 More importantly this venue can accommodate families that have a more non-traditional service in mind. The entire room can be set up with linen covered round tables and chairs and the family can have a catered reception, where that side room at the front acts as the buffet serving area. Families that choose cremation seem to particularly like this less formal setting.

Also, families having their funeral or memorial service at our King George funeral home have used the Colonial Beach venue for a catered reception because of the close proximity of the two.

Michael Stock, at his wife Ursula’s celebration of life party, standing by the open bar she had insisted on including at the party.

At the Three Flames Restaurant in San Jose, Calif., the banquet hall is packed. When they get the cue, 140 people raise their glasses for a toast. A sign in the corner reads “No Tear Zone.” With a fully stocked open bar, catered food, and even favors, it looks like a fabulous party—which is exactly what Ursula Stock had in mind. 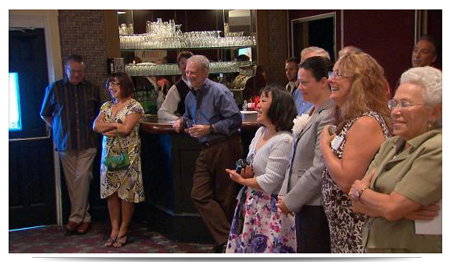 (As seen on CNBC)

It’s a party Ursula Stock knew she’d never attend. She decided back in the ’70s that she wanted a celebration of life instead of a funeral. So she chose everything — from the music to the guest list, Ursula left Michael with no doubts about her final wishes.

“There was some surprise,” said Michael .”The open bar was one. Some of the relatives said, ‘Oh, no!’ and I said, ‘She’s not coming back to haunt me on this, OK? That’s what she wants, that’s what she’s going to get.”

Boomers Do Funerals Their Way

Faced with aging parents and their own mortality, it’s something more and more baby boomers are doing: taking life — and death — into their own hands.

Joanne Grady-Savard is one of them. The avid runner and president of a Boston-based staffing company has already planned her final exit.

“After funeral services, they go to my favorite spot from my running route,” she said. “We would have a tent. We could have a lobster bake or a clam bake. No high heels, no black dresses; just an opportunity to sit on a bench and be in a beautiful environment.”

Grady-Savard plans to have an engraved memorial bench placed at her “favorite spot,” which overlooks the Atlantic on Massachusetts’ South Shore. She’s even developing a book of life lessons to be passed out at her funeral, instead of traditional Mass cards.

“We spend so much time and effort and energy planning our children’s weddings and birthdays and anniversary parties,” she said, “that this is, in my opinion, one of the most critical pieces of our life. It’s something that you have control over; you manage the legacy.”

“When someone you love becomes a memory………. Their memory becomes a treasure.”