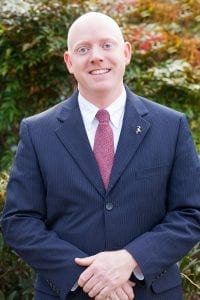 Edwin “Ned” Taliaferro III was raised in King George County on the family farm, Spy Hill. He followed in his father’s footsteps into the funeral business at Nash and Slaw Funeral Home in King George and Colonial Beach. Prior to working for his father he graduated from mortuary college and served his apprenticeship at Murphy Funeral Homes in Northern Virginia. He had worked at the family firm for years until his father’s retirement and sale to Storke Funeral Home. In June of 2016 he stayed “on board” at the King George chapel and Colonial Beach chapel and is a valued member of the Storke Funeral Home team. He is an active member of St. John’s Episcopal Church in King George and in his spare time enjoys operating heavy equipment. He can often be found helping friends and neighbors with projects, both large and small.