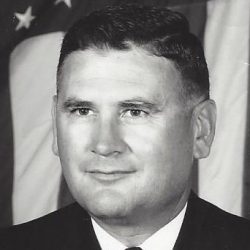 Captain Daniel N. Shockey, 94, U.S. Navy, Retired, of Caroline County, VA died on January 6, 2020 at his home. Captain Shockey was born on January 2, 1926 in Grant Co., Indiana, the son of Harvey and Irene Shockey. He was a graduate of the U.S. Naval Academy, Class of 1948. After graduation he was assigned to the Destroyer Force, Atlantic Fleet, and served on the USS E.A. Green (DD-711). In 1949, he was assigned to postgraduate school at Rensselaer Polytechnic Institute, Troy, NY. After receiving BCE and MCE degrees, he transferred to the Naval Civil Engineering Corps in 1951. Subsequent duties included various assignments with U.S. and Allied Forces, both within the U.S. and overseas, including Italy, Norway, and the Republic of Vietnam, where he commanded a Seabee Battalion during the Vietnam War. He retired from the Navy in 1975. After retirement, he accepted employment as resident and CEO Panero-Tizian, Associates, Consulting Engineers, New York, NY. Subsequent employment was with the Virginia Community College System, Richmond VA as Director, Facilities Engineering and Construction. Later, he was a consultant to various State Agencies in engineering and construction. He was a Registered Professional Engineer in Virginia, New York, and Washington, DC. He is survived by his loving wife of 71 years, Dorothy M. Shockey, two children, Donald W. Shockey and his wife, Debra of Mechanicsville, VA and Debra J. Canterbury and her husband, Larry, of Spring, TX; five grandchildren, Kristen Bateman (Adam), Michael Shockey, Matthew Shockey, Michelle Felock (Andrew), and Danielle Tomak (Jeff); four great-grandchildren, Jack and Caroline Bateman and Audrey and William Felock. Captain Shockey was a member of St. Asaph’s Episcopal Church, Bowling Green, and served on the Vestry as Senior Warden for several years. He was a member of the Military Officers Association. Memorial services will be conducted at St. Asaph’s Episcopal Church, Bowling Green, VA on Monday, January 20, 2020 at 11:00.  Burial in Arlington National Cemetery on May 28, 2020 at 11:00 AM at the Fort Myer Old Post Chapel, 204 Lee Ave, Fort Myer, VA 22211. In lieu of flowers, the family suggests that donations may be made to the Ladysmith Volunteer Fire Department or Ladysmith Volunteer Rescue Squad or to St. Asaph’s Episcopal Church in Bowling Green.