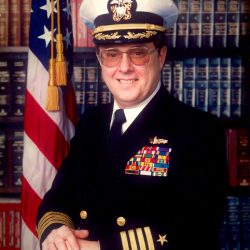 A funeral Mass will be held in the Old Post Chapel at Ft Myer, at a time to be announced. Burial, with full Navy honors, will follow in Arlington National Cemetery.

Ed was born June 18, 1946 in Brooklyn, New York and grew up in Glen Head, Long Island, the eldest of three children born to Edward and Eleanor Smith. Ed graduated from the Ohio State University’s NROTC program in 1968 with a BA in International Relations. Following his service in Vietnam, Ed continued his education and graduated with a MA and doctorate in International Relations from The American University.

During a 30-year Navy career, Ed saw combat in Vietnam as the Intelligence Officer on the staff of Commander Delta Naval Forces, completing almost 200 combat missions in helicopters and OV-10 Broncos, to include being shot down and wounded in action. Later assignments included duty in the Navy Field Operational Intelligence Office, as Executive Assistant to the Political Advisor to CINCLANT/SACLANT, and as Assistant Naval Attaché to Paris. His last sea duty was as the Assistant Chief of Staff for Intelligence for Cruiser Destroyer Group Eight and the Battle Force Sixth Fleet, a tour that included participation in the intercept of the Achille Lauro hijackers and in the 1986 and 1987 operations off Libya. He then served on the staff of the Director of Naval Intelligence and was a primary player in creating the Navy white paper “…From the Sea.” Subsequently, he set up the Intelligence Directorate in the Office of Naval Intelligence and served as Deputy Director for Intelligence. His final Navy tour was on the personal staff of the Chief of Naval Operations in the CNO Executive Panel where he directed the Navy’s RMA wargames and was the author of the Navy’s Anytime, Anywhere vision.

Upon his retirement from the Navy in 1998, Dr. Smith joined Boeing’s Washington Studies and Analysis think tank as Executive Strategist for Effects-Based Operations. While at Boeing, he worked closely with the Office of the Secretary of Defense, the Office of Force Transformation, and others on network-centric and effects-based operations.

Captain Smith earned numerous military decorations, including the Defense Superior Service Medal, the Legion of Merit, two awards of the Bronze Star with combat “V” and Gold Star, the Purple Heart, the Air Medal, two awards each of the Defense Meritorious Service and Meritorious Service Medals, a Combat Action Ribbon, Presidential and Navy Unit Citations, a Vietnamese Cross of Gallantry, and the French Order of National Merit – Officer.

Outside of his illustrious military career, Ed and his wife Marie-France established a loving and supportive family. Ed was a world traveler, a talented painter, gardener, and cook, and he was intensely dedicated to his wife, children, and grandchildren. Despite struggling with Alzheimer’s in his later years, he never lost his love and excitement for time with family. His big hugs and infectious smile will be deeply missed.

Ed is survived by his wife of 45 years, Marie-France Smith of Falls Church, two children, Stephanie Whitaker of Arlington, and Allen Smith of Arlington; a sister, Joanne Henry of Athens, GA; and five grandchildren, whom he adored, Katherine, Caroline, Colin, Emmett, and Charlotte. Ed was preceded in death by his sister, Patricia Wyckoff of Washington, DC.

A funeral Mass will be held in the Old Post Chapel at Ft Myer, at a time to be announced. Burial, with full Navy honors, will follow in Arlington National Cemetery. Online condolences may be left for the family at www.storkefuneralhome.com. Updates regarding the funeral date and time will be posted on this website.