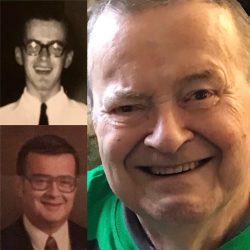 A memorial Mass will be held at a later date and location to be determined.

Francis H. Connolly, 76, of Little Chute, Wisconsin passed away Sunday, May 17, 2020 at 11:14 pm in St. Mary’s Hospital, Richmond, VA. Born and raised in Milwaukee, WI. He lived and worked there and subsequently moved to northern Virginia for many years. He was a member of St. William of York in Stafford, where he was very active with the Knights of Columbus, Father Widmer Counsel #7877 having attained the Fourth Degree and served as Grand Knight (PGK) and District Deputy (FDD). He is survived by his wife, Barbara Connolly; his children, Ronald, Sean (Jennifer), Brigid, Erin and Timothy  (Lori); his Step Mother Anita; siblings Robert (B.J.), Thomas (Mary), Kathleen (Phil), Susan (Joe), Maureen (Bill); Great Aunts (in-law) Laverne and Mary, his grandchildren, Caroline, Cameron, Joseph, Matthew, Diana, Eoin, Kylie, Nora, seven great grandchildren, and numerous nieces, nephews, cousins, in-laws and extended and adopted family.

He was preceded in death by his twin sons, Gerald and Gerard, Brother: Reverend John Connolly M.Th., Mother Dorothy, Father Joseph, Uncles John, William and James (Joan), Grandmother Margaret and Grandfather Joseph and Sister In-law Judy. A memorial Mass will be held at a later date and location to be determined.

In lieu of flowers, memorial contributions may be made to the charity of your choice. Online condolences may be left for the family at www.storkefuneralhome.com.