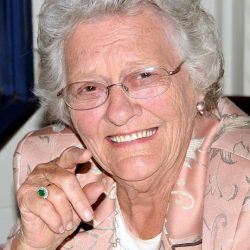 On December 27th, 2018 Georgia Ann Phillips went to be with the Lord. Georgia was born in King George, Virginia in 1933 to George and Ida McKenney. On December 31, 1950, she married Devanent W. Phillips in La Plata, Maryland and they had two children, George Bruce and Alice.

Georgia grew up to all aspects of farm life. She enjoyed helping her parents with farm chores, keeping a garden, preserving food for the winter, and tending to the livestock. She was blessed with a beautiful voice and sang the national anthem each morning in high school and regularly sang on a radio station in Washington, DC. She also was a talented artist and her paintings are found all over King George County to this day. In 1970 Georgia was offered a part-time job with the US Postal Service and within a year was trained and certified to be the Postmaster for the Ninde, Virginia Post Office. For the next 35 years, she served her community there and became an attraction of her own. Her affable personality and “tell-it-like-it-is” style brought in people from all over King George and Westmoreland counties, some of whom actually had postal business to conduct.

Surviving Georgia is her daughter Alice and son-in-law Paul Stanton, her grandson Paul Michael Stanton, and her sister Barbara Taylor. She was preceded in death by her husband Devanent and her son George Bruce.