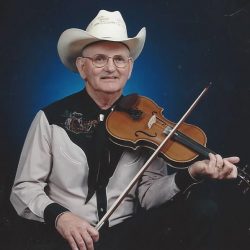 James “Jimmie” Brown Delozier, 88, passed from his home in Woodford on to his heavenly home on Friday, January 31, 2020. Jimmie was born June 2, 1931 in Fairfax County, the son of Emery and Cora Delozier. He worked at Fruit Growers Express in Alexandria, Virginia for 19 years and retired from Amtrak after 11 years. He attended Benchmark Baptist Fellowship in Fredericksburg, Virginia and was a lifelong member of the Lions Club of Colonial Beach. Jimmie’s passion was playing music with his musician friends. He came from a very musical family where at the age of 7 he started playing the guitar. Ten years later, the fiddle became his preferred instrument. In fact, Jimmie manufactured his first fiddle from a cigar box. By age 17, he was playing the fiddle professionally. He played the fiddle in numerous bands over the years: Benny and Vallie Cain and The Country Clan of Arlington, Joe Sacra, Jr. and The County Boys of Fredericksburg; Bob Goff and The Bluegrass Buddies; and Monte Monteith and The Skystone Bluegrass Band. He had his own band, Jimmie Delozier and The Sensations which played at many functions and venues. He and his wife were owners of Glendale Country Club, Bealeton, where he and his band performed for a number of years. Jimmie won national champion fiddle awards eight times and Virginia fiddle championships more than twelve years. Jimmie was also a recording artist with the Rebel Recording Company, recording his own versions of “Ragtime Annie”, “Orange Blossom Special” and his own special composition of “Jim’s Mule” — all without the benefit of formal music lessons. Jimmie played at the Smithsonian Institute in Washington DC as well as many military installations, Bluegrass festivals, churches, schools, radio and tv shows. He performed with great musicians such as The Wheeling and Nashville Show Cast, Jim and Jesse, Mac Wiseman, Jimmy Martin, Osbourne Brothers, The Stoneman Family, The Stanley Brothers, Roy Clark, Bill Monroe, Jimmy Dean, Conway Twitty and many others. Jimmie, along with the Skystone Bluegrass Band, won First Place Float at the Fairfax County’s Fourth of July Parade. Jimmie is survived by his beloved wife, Anne Davis Delozier of 54 years, and five sons, Donnie Delozier (Denise) of Nashville, Larry Delozier, Dale Delozier (Cathy) of Fredericksburg, Jackie Delozier (Debbie) of Woodford, Billy Delozier (deceased), two grandchildren Rachel Rico (Blaine) of Rossville, GA and Eric Delozier of Fredericksburg, as well as his companion Boots (dog) and many loving relatives and friends. In addition to his parents, Jimmie was preceded in death by his brothers and sisters, Bruce, Buster, Bennie and Raymond Delozier and Christine Payne, Bessie Davis, Nellie Atwell, Dollie Simmons and Sadie Arrington.

A funeral service will be held on Tuesday, February 4th at 4:00 pm in the Bowling Green Chapel of Storke Funeral Home. The family will receive friends two hours prior to the service. Interment will take place at 1:00 pm on Wednesday, February 5th in Mount Comfort Cemetery in Alexandria. In lieu of flowers, the family requests that memorial contributions be made to Benchmark Baptist Fellowship, 10510 Benchmark Road, Fredericksburg, VA 22408 or Hospice-Capital Caring, 111 Olde Greenwich Drive, Fredericksburg, VA 22408. The family would like to say a special thank you to friends, Kathy and Ken Peyton, and caregivers Cindy, Jean, Karen, and Pamela.
‘”