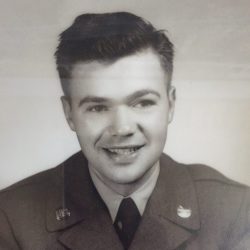 A Memorial Service will be scheduled at a later date

John was born May 30, 1930, in Staten Island, New York, to Herbert and Dorothy Thomson. As a young man, John had incredible adventures traveling to faraway places such as Egypt and living in Athens, Greece, where he worked for the American Embassy and fell in love with the country and the language. While living in Greece, he was drafted and served with honor in the US Army for two tours during the Korean War as a staff sergeant in charge of the motor pool. After the Army, John studied at George Washington University and Corcoran School of Art. It was in Washington, DC, where he met the love of his life, Mary, who was working at Bureau of Ordnance for the Department of the Navy with her twin sister Martha. After they were married, John and Mary briefly lived in New York where he worked as an illustrator and cartographic draftsman. They later moved to Alexandria, Virginia, where John worked for the County of Fairfax. Then he and his family moved to Dahlgren, Virginia, to take a job as an Engineering Technician at what is now known as Naval Surface Warfare Center. He retired from NSWC after working there for 32 years.

John was known for being able to fix and make just about anything. He was an incredible artist and gifted with many talents. He loved sailing, fishing, and working on anything with his hands. He had a passion for classic cars and auto repair, and he proudly rebuilt a 1931 Ford Model A. He enjoyed cooking crabs and hosting his family and friends in his back yard. He was an active member of the Dahlgren Lions Club and helped Oakland Baptist Church with many of their projects and maintenance. More than anything, John loved to spend time with his children and grandchildren and he especially loved taking the annual family beach trip and giving the grandkids a ride on his boogie board. John pursued a life of learning, taking classes and graduating from The University of Mary Washington in 1980. Known for having almost all the answers on Jeopardy, he was one you could never beat in any trivia game. “Pop” always had a smile on his face and was never known to raise his voice or speak a cross word about anyone. He had the gift of making everyone he met feel comfortable and special and often he taught them a word or two of Greek.

Special thanks to the caregivers at Paramount Senior Living and Bowling Green Health and Rehabilitation Center.

John’s wishes were to be cremated, and the family will schedule a memorial for a later date. Online condolences may be left for the family at storkefuneralhome.com.