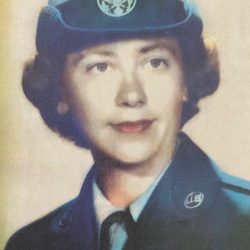 Funeral services will be at Arlington National Cemetery in Arlington, VA with Military Honors. The burial date is still pending and updates will be posted on www.storkefuneralhome.com

Born in Scranton, Penn. on November 24, 1930, to Anton Joseph and Catherine Veronica (Dudek) Welenz, Marion was the second of three daughters. In her youth, she loved swimming and ice-skating. She was classically trained in voice and piano, gifts she shared throughout her life.  In her later years, she found a deep passion for art, winning several awards for her original paintings. Marion was deeply proud of her service in the United States Air Force and was once appointed to work as a personal secretary to President Dwight. D. Eisenhower. It was while at the Pentagon that she met Edward Joseph Hedrick. The two married in 1960 and raised five children.

A member of the Order of Eastern Star (OES), Marion served as Worthy Matron and was appointed as State Representative from Oklahoma to Minnesota by the Grand Chapter of Oklahoma, OES.  As a doting mother, she was also active with Cub Scouts, Boy Scouts, 4-H Club, DeMolay International Mother’s Club and, most notably, Mother Advisor for the International Order of the Rainbow for Girls. A proud woman veteran and member of the Oklahoma Women Veteran’s Organization (WVO), Marion was a longtime organizer of Ft. Sill’s Annual Retiree Appreciation Day.  In 1997, she attended the dedication ceremonies for the Women in Military Service of America (WIMSA) Memorial at Arlington National Cemetery. In 2002, Marion’s original design was selected as the state emblem for Oklahoma’s WVO flag and, that same year, the organization voted her Woman Veteran of the Year. Marion was preceded in death by her parents and siblings; her oldest daughter, Juliana (Hedrick) Brodeur; and her husband, Edward.  She is survived by four children: Edward (Mel) Hedrick, William (Sam) Hedrick, Catherine Hedrick-Armstrong, and Anton (Tony) Hedrick; nearly four dozen grandchildren and great- grandchildren, and a loving extended family. Among her greatest contributions was her capacity for unconditional love. She will be remembered for her keen sense of humor and her propensity to make up new words when established words eluded her.  Marion’s funeral services will be at Arlington National Cemetery in Arlington, VA with Military Honors. The burial date is still pending and updates will be posted on www.storkefuneralhome.com. In lieu of flowers, the family is requesting donations be made to the Women in Military Service Memorial in memory of Airman Second Class Marion Welenz Hedrick to P.O. Box 420560 Washington, DC 20042-0560 or at https://www.womensmemorial.org/.