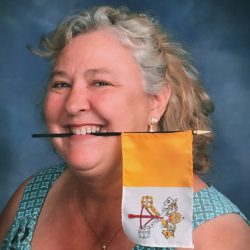 A TRIBUTE TO MARY

Funeral arrangements are at the end.

our sister Mary (age 58) passed peacefully, 12/27 on the feast of The Holy Family with family and a great friend by her side and ironically her nurse nearby named Mary that had a splash of pink in her hair. 💗

she had an army of prayer warriors praying for her, to include many priests, lots of family, and too many friends to count that she had touched as she went through her life’s journey. she appreciated these prayers more than you will ever know. her lungs were not meant to heal. she was in the 1% rare category of how her body reacted to a chemo drug that was used to treat a relatively treatable cancer. that’s Mary- rare & unique.💜

she was known as Mar, Mary, M.C.,Mary Carole, Mary-Carol, Muddy Cuddle and probably more. years ago she began writing her name as “mar” in lower case. in fact she wrote everything in lower case except for when referring to God, Jesus, Mary & Joseph. it drove us crazy. she did it to humble herself I’m sure and to show respect where it was deserved.

she had a huge devotion to St. Joseph! in case you didn’t know, his feast day is 2 days after St. Patrick. she celebrated march 19th as it should be for the foster father of Jesus. he was the quiet, devoted carpenter. he simply believed and he trusted. he never spoke a word in scripture yet he is an example to all. the color green is attributed to St. Patrick. she decided St. Joseph’s color should be pink or rose. think about the old plastic nativity scenes people put in their yards at Christmas- Mary was in blue. Joseph was in pink. rose is the color of joy! one year she celebrated with hats, shirts and pens she had made for family and friends with St.Joseph written on them, in pink of course! Mary is known for being a little zany and passionate. her house is white with rose accents. her car is also white with rose accents. 💖 how fitting she has passed in the year designated as the year of St. Joseph as designated by the Pope to celebrate the 150th anniversary of St. Joseph being the patron saint of the universal church!

she was the middle child of 7 kids. for many years the misunderstood child. she spent more time with friends than family early on though who could blame her with 3 brothers and 3 sisters wreaking havoc in a small rambler. our mom was saddened to think she wanted to be adopted by a neighborhood mom but in the end was delighted to have her by her side for the last 20 years of her life.

she was a jack of all trades. a cashier, a florist, a bookkeeper, a manager, a bus driver, a nun, a caretaker.

her vices were a mc donalds cheeseburger & fries, a pizza with pineapple, bacon and onions, popeyes (Pope Yes) fried chicken. if you have one of those, consider it an outing and meal with Mary.

when our mom was getting older and had a few surgeries on her knees and spine, Mary decided it would be beneficial to get her certified nursing aide (cna) license. she studied and practiced and got it. she used what she learned to assist our mom through surgeries and subsequently to help her takeover guardianship of our oldest disabled sister when our mom passed six years ago.

Mary was always a free spirit and had a bit of a wanderlust. she wanted to live at the beach. so she moved to nags head for a couple years. she did a stint living on a sailboat. she loved to visit friends and family far and wide and was always up for a drive to wherever it took her…often times lost, but it didn’t phase her. in the late 80’s she went on a pilgrimage to medjugorje in bosnia-herzegovina with our mom and her little sister. she left there spiritually strengthened, renewed and devoted to the Blessed Virgin Mary. in the early 90’s she went backpacking through italy with her little sister. she wanted to see all things religious at that point. her sister wanted the fun stuff. we compromised and saw rome, the Pope, assisi, loreto, padua, venice, milan all while eating lots of gelato! many excursions were had with her nieces and nephews to destinations unknown (much to the stress of their parents at times). she loved all of them deeply. 💞

at one time she was engaged to be married to a lovely man. showers and parties were had, presents were bought. she called it off because it was not the right fit for her. she forever wanted to discern God’s will for her. in the early 2000’s when she was in her late 30’s she entered the religious life in omaha, nebraska. we like to think of her as “the flying nun”. this particular order took women that were older than the average 18 year old novice. watch out omaha here she comes! she brought life and energy into that convent that they weren’t quite ready for. she may or may not have colored her dog (which was fluffy white originally) into a pastel swirl of colors for Easter! she tried to be “obedient” but that was just not in her dna at the time nor was it the right fit. she knew it was time to move on.

she returned home to her mom and her older sister and finally settled in to the right fit. she continued with her love of Jesus, Mary and Joseph. all who met her knew she was devoted by her actions, her “God bless’s”, her prayer life, her contributions to the legion of Mary, her “little” things that she would do with great love, even her license plate that read “MOJESUS”💕 don’t get me wrong. she was not perfect and she would be the first to tell you that. but she did strive to do God’s will and she did become obedient more than most of us could ever contemplate.

she was the godmother to many and the aunt to many more. one individual in fact, calls her affectionately “mommy”. if you are so lucky as to be counted in her fold consider yourself lucky. she prayed for you unceasingly and likely is still in your corner now even more so!

Mary was single all her life but never alone. she would say she was married to Jesus. we will all miss Mary but as she would often say to our mom and to Jesus (much to our angst) i’ll see you soon! 💗

Mary came along way since talking and giggling her way through 9 years at St. Michael’s and being voted Class Clown and Most Mischievous by her peers at Annandale High School in 1980. Mary has been a catechist throughout the years. In addition, she was a member of The Legion of Mary at St. Anthony’s since 2015. She has been the treasure & the vice-president. In October of this year she became the current president. Her Legion family recall her ending sessions & meetings with a heartfelt “Good Job!”

A plethora of aunts, uncles, cousins, friends, prayer warriors & random people she touched if just for an instance.

Visitation at 11:00 in St. Anthony parish hall (rosary & photo slideshow)- no viewing. In keeping with Mary’s wishes she will be cremated.

Funeral Mass at Noon in the church.

– will also have a speaker outside to hear the service and live-streamed to include inside the adjoining hall. The link will be on the church facebook page which is listed on their website below.

Burial- to follow the mass on the church grounds.

**The family requests & encourages you to wear a face mask to keep those at risk safe. We are making an effort to provide lots of space to spread out & social distance. Feel free to attend the visitation and/or the mass. Supposed to be 62 degrees and sunny on Saturday – pull up a chair and tailgate the service in the parking lot if it makes you more comfortable.

In keeping with Mary’s thoughts on funerals, we will be celebrating her in a joyful manner. She believes the day you pass is your feast day! Born into eternal life! In keeping with this mantra, she rarely wore black at a funeral. Feel free to don splashes of color- she would TOTALLY appreciate that! Rose color anyone?🌷💐🌸🌺