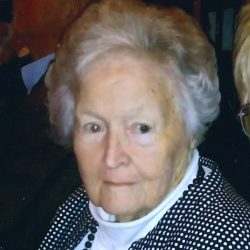 A funeral will be held at 11 am Saturday, August 22 at Shiloh Baptist Church with the Rev. Randy Allensworth officiating.

Burial will be in the church cemetery.

She met Aubrey S. Jennings and married on June 21, 1955; they then moved to Charleston, SC where they eventually welcomed a daughter, Janet Jennings. After returning to King George, Nancy and her husband welcomed their second child, a son, Craig Jennings and later became members of Shiloh Baptist Church.

Nancy retired after faithfully working for 56 years at Billingsley Law Firm in King George. In her free time, she loved to read, cook and spend time with her family. She also enjoyed seeing friends in Fairview Beach, particularly the regular holiday cookouts. Nancy was a lifetime member of the King George Fire Department Ladies Auxiliary where she served in various capacities.

A funeral will be held at 11 am Saturday, August 22 at Shiloh Baptist Church with the Rev. Randy Allensworth officiating. Burial will be in the church cemetery.

The family requests that in lieu of flowers, memorial contributions be made to either Hospice, c/o Mary Washington Hospital Foundation, 2600 Mary Washington Blvd., Fredericksburg, VA 22401 or the King George Fire and Rescue, 8122 Kings Highway, King George, VA 22485.  Online condolences may be left for the family at www.storkefuneralhome.com.