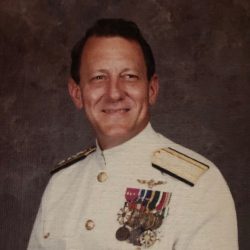 Funeral services will be held November 23, 2020 at 9 AM  in the Old Post Chapel at Fort Myer and burial, with full Military Honors, will follow in Arlington National Cemetery.

Born in Jacksonville, Florida, March 24, 1928, the son of a German born US Army Captain veteran of World War I.  Paul loved boating, fishing, and snow skiing.  However, he loved flying in the Navy more than anything.

He entered the Navy through the Naval Aviation College Program in 1946.  He served on active duty from April 1948 to August 1980.  His career included duty in the Atlantic and Pacific Fleets, the Naval Air Training Command and Washington, D.C.  He was a flight instructor and a fighter photo pilot, serving in the Bureau of Naval Weapons during the Cuban Missile Crisis.  Paul deployed three times on air craft carriers in S.E. Asia during the Vietnam war.  Assignments included Air Wing 16 operations Officer, XO/CO of Attack Squadron 164 and Operations Officer on the Staff of Commander, Carrier Division Nine.   During those years he obtained a Master’s Degree in International Relations from George Washington University.

Returning to Washington, D.C. as a Flag Officer later in 1975, Paul became Navy Auditor General and Director of the Naval Audit Service where he served until 1978. He continued service as a Rear Admiral as Deputy Commander/Comptroller at the Navy Sea Systems Command, serving out his final tour after 34 years on active duty as Vice Commander, Sea Systems Command until his retirement in 1980.

In his second career Paul continued to support the active duty community.  He spent seven years with the United Services Planning Association, and acted as an independent agent for a firm that worked with military families in their financial management.  He was an acknowledged military consultant and insurance industry consultant with the Hauck Companies.

In 1995 Paul and his wife Tan built a beautiful home affectionately named “Final Landing” in Compton, MD , not too far from NAS Patuxent River.  He was very active in community associations over the years, serving on the Boards of several organizations including, a Hospital Foundation, Credit Union, Rotary Club, Navy League Council and National War College Alumni Association. Recognized for his expertise, Paul was the Chair for numerous Washington, D.C. area National Security Seminars over the years.

His favorite plaque on desk was Press On by J.Calvin Coolidge, 30th President of the United States of America

Nothing in the world can take the place of persistence. Talent will not; nothing is more common than unsuccessful men with talent.  Genius will not; unrewarded genius is almost a proverb.  Education will not; the world is full of educated derelicts. Persistence and determination alone are omnipotent.  The slogan Press On! Has solved and always will solve the problems of the human race.

He was an admired leader during difficult times and influenced the success of the people he served with.  His charming, humorous and generous personality will be missed by all who knew and loved him.

Close family friend and “adopted son” John Genovese once asked him if he could be anything other than “the Admiral” what would it be.  Paul replied, “I want to be a seagull so I could fly all day and live on the water.”

Funeral services will be held November 23, 2020 at 9 AM  in the Old Post Chapel at Fort Myer and burial, with full Military Honors, will follow in Arlington National Cemetery.  Memorial contributions may be made to Paralyzed Veterans of America, Wounded Warrior and Disabled American Veterans.   Condolences may be left for the family at www.storkefuneralhome.com.