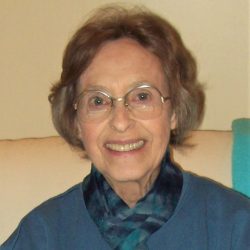 Pauline “Pete” Gertrude Hoge Sharpley, 84, of Dahlgren and Keswick, VA, departed this life on Monday, September 23, 2019, in hope of glory, being ushered into the presence of God. She will be fondly remembered for her constant smile, laughter, joy, friendliness, encouraging words, and boundless energy.

Her life revolved around her family and friends. She loved yardwork, nature, thrift shops, yard sales, and home decorating. She was born to the late James Willard Hoge and Annie Louise Hoge on November 11, 1934, growing up in Dahlgren, Virginia. She graduated from King George High School in 1952 and went to work for the Navy Base in Dahlgren before moving to Virginia Beach where she met and married the love of her life, Ronald Lee Sharpley, in 1961. Shortly after, she became a mother and homemaker, raising her two daughters as they moved around the country, residing in Vienna, VA, Liberty Lake, WA, and Charlottesville (Keswick), VA. For 22 years, she was a secretary in the guidance department at Walker Middle School in Charlottesville; after retiring in 2000, she returned to her family home in Dahlgren. Pete is preceded in death by her parents and her beloved daughter, Janna Rhae Sharpley.

She is survived by her husband of 58 years, Ronald, her sister Margie Gallahan, her brother and sister-in-law Gene and Lorraine Hoge, her daughter and son-in-law, Paula and Paul Werme, her grandchildren Timothy, Jennifer, and Emily Werme, and her many cousins, nieces and nephews.

The family will receive friends from 6:00 to 8:00 p.m., Friday, October 4, 2019 at Storke Funeral Home, Nash and Slaw Chapel in King George, Virginia. Her funeral will be at 11:00 a.m., Saturday, October 5 at Oakland Baptist Church in King George. Burial will be at 11:00 a.m., Monday, October 7 at Riverview Cemetery in Charlottesville, Virginia.  In lieu of flowers, donations to the American Cancer Society would be appreciated. Condolences may be left for the family at www.storkefuneralhome.com.