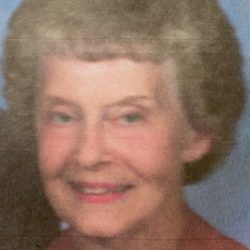 A visitation will be held on Tuesday, May 12th at 1:00 pm in Round Hill Baptist Church.

A funeral service will be held on Tuesday, May 12th at 2:00 pm in Round Hill Baptist Church, with burial in the church cemetery.

Phyllis Virginia Hudgins Davis passed away at Marion Manor in Stafford, Virginia on May 8, 2020. She was born September 25, 1934 in Matthews, Virginia to the late Georgie Louise and Stillman Hudgins.

She was educated in Matthews, Virginia, graduating high school in 1952 and moving to Richmond, Virginia to work for C&P Telephone Company where she stayed for 35 years until her retirement. She always spoke highly of her time there and the valued friendships she made. For over 20 years, Phyllis, with her family, owned and operated the Circle Supermarket. For many years, she worked in the store nights after working full days at the telephone company. She was a dedicated and punctual employee.

Phyllis heard a rumor of a handsome Fuller Brush Salesman circulating in the area, and she made it a point to buy some face cream. The rest was history, and she married John Henry Davis on November 17, 1955. They loved each other until his passing in July of 2012. Phyllis missed him every single day of her life.

Phyllis’ life can be defined by her love of God, her love of her family, and her love of a good deal on an antique. She was a faithful member of Round Hill Baptist Church and attended Sunday services before breakfast at Olas for as long as her health allowed.