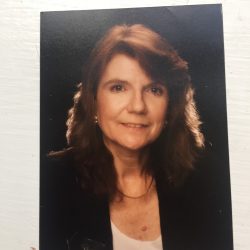 Phyllis Coleman Patterson, 74, died Monday, October 12, 2020, in Jacksonville, Florida. She was a native of Bowling Green, Virginia, daughter of the late Frederick Johnson Coleman, Sr. and Laura Elizabeth Beazley Coleman. She was a graduate of Caroline High School, attended Smithdeal Massey School, Richmond, Virginia, and worked in Bowling Green until she moved to Wichita, Kansas, where she served in the U.S. Air Force 1973-1980. In 1976, she married James Patterson and in 1980 they moved to Albuquerque, New Mexico, where she earned her degree from the University of New Mexico and worked for the U.S. Department of Housing and Urban Development. When her husband passed in 2014, she moved to Fredericksburg to live with her lifelong friend, Dale Leite. In March, 2019, she moved to Middleburg, Florida, near her daughter, Samantha. In addition to her husband, father and mother, she was predeceased by her brother, Wilson L. Coleman. She is survived by her daughters, Michele L. Lueras (Mat) and Samantha J. Patterson; her stepdaughters, Tammie Bennett and Bonnie Taylor; three grandchildren, Deveney M. Jeffs (Warren), Jalen Johnson and Andy Garcia; sister, Mary Frances Coleman, and brother, Johnson Coleman; five nieces, one nephew, and their twelve descendants. Services will be held at 11:00 a.m. on Saturday, October 24, 2020 at Storke Funeral Home, Bowling Green. Burial will be in Santa Fe National Cemetery on November 23 at 10:30 a.m. In lieu of flowers, memorial contributions may be made to St. Jude Children’s Research Hospital, 262 Danny Thomas Pl., Memphis, TN 38105, a favorite charity of hers. Memorial condolences may be made online at www.storkefuneralhome.com.