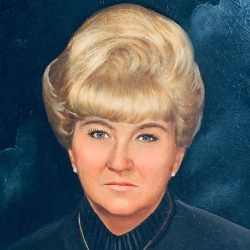 A private graveside service will be held at Historyland Memorial Park

Born in Philadelphia, a daughter of the late John Anthony and Anna Elizabeth Hynds Bell, she spent her formative years in Philadelphia and South Jersey. As a teenager, she would dance on the iconic American Bandstand in the days before it was televised.  She later entered the U.S, Army and while stationed at Ft. Myer, VA, she met her future husband, Bernard Francis Shanley.  Raising their family in Falls Church, she was a respected businesswoman.  Working from the National Press Building in Washington, DC, she owned and operated Scope Publications, where she published a topical and widely read newsletter entitled “Energy Digest”.  She worked in the Commercial Printing industry for over 2 decades as well.  Retiring to Colonial Beach in the early 1980’s, she was a member of St. Elizabeth Catholic Church and was a devoted fan of the Washington Redskins, singing “Hail to the Redskins” after every score.  To her grandkids, she was Nani.  Everyone else knew her as Chickie.  She loved her family and friends.

Due to the social distancing restrictions imposed in response to the pandemic, services are limited. There will be a private graveside service with interment at Historyland Memorial Park.

In lieu of flowers, memorials may be made to Boys Town at www.boystown.org.