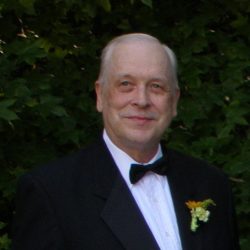 Roy Bernard Hempley, age 80, of Bowling Green, VA passed away July 30, 2020. Roy started his military career in the marines.  Later he joined the Air Force where he obtained the rank of Captain before he retired in 1979.  As an officer in the Air Force, he was stationed in many places including Washington, D.C., Naples, Italy, and Eglin, Florida.  During his time in the military, he earned a Master’s degree in game theory at the University of Wyoming.  After retiring from the Air Force, he worked at Pratt and Whitney in West Palm Beach, Florida for three years. He then moved to Washington D.C. to work in the Pentagon where he retired after twenty years as a program analysist. He was an avid trumpet enthusiast who began playing the trumpet in Junior High School.  As an adult Roy played in several bands eventually preferring brass quintets. He started several quintets including one called Brass Lite playing widely in the area.  He gained an interest in Bach trumpets and began researching their history.  This led him to become an expert on the subject in which he wrote several articles. Roy was preceded in death by his father Oscar Lee Bernard Hempley, mother Estelle Steedly Kendrick and step-mother Helen Ritger Hempley.  He was also preceded in death by child Melinda Johnson, grandchild Tyler Lee Hood and great-grandchild Tyler Rex Leon.  He is survived by his wife of 43 years Vivian Gail Horton Hempley and children Kevin Kohlberg, Sharon Hood, Bryan Kohlberg, Lucas Hempley and Caprice Austin.  He is further survived by grandchildren Katy Hood, Riley Hood, Makenzie Hood, Tyler Kohlberg, Kayla Kohlberg, Chase Kohlberg, Barbara Leon, Samantha Johnson, Raina Hempley, Seth Hempley and Casiah Austin.  Roy was a dedicated husband and a father to all children in his life. The viewing is Tuesdday 4:00-8:00 PM at his home at 11503 Minarchi Road, Woodford, VA 22580. Burial will be at Quantico National Cemetery on Wednesday, August 5th at 11:00 AM.