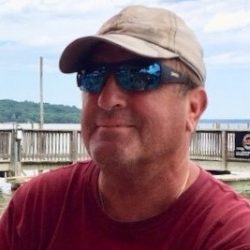 Wayne Allen Dykstra (63) passed peacefully in his sleep at his home in Colonial Beach, Virginia on Thursday, June 20, 2019.

Wayne was a humble man who let his actions speak louder than words. Born in Litchfield, Minnesota in 1955, he was the third of six children born to Wilfred and Beatrice “Betty” Dykstra. He spent his formative years in Webster City, Iowa, where he graduated from the local high school before enlisting in the United States Navy. While serving in the Navy, he met his wife of 43 years, Mary Virginia, and together they had three children: Joshua Jordan, Amy-Marie, and Cory Michael. Following his naval service, Wayne worked for the Department of Navy for 26 years before retiring in December 2017. On the weekends, Wayne could be found on the boat with Mary his ‘boating family’ enjoying life on the water. He was always very generous and giving of himself and his time. A man of few words but of big action and one of the most dependable people you would ever encounter.

Wayne is proceeded in death by his father Wilfred and his son Joshua. He is survived by his wife, Mary; children, Amy and Cory; granddaughters, Ella and Sofia; mother, Betty; and three brothers and two sisters.

Services will be held on Wednesday, June 26, 2019, at 5:00 pm at St. Elizabeth Catholic Church in Colonial Beach, VA. In lieu of flowers, the family has asked that anyone wanting to do so make a contribution to the American Diabetes Association in Wayne’s name. www.storkefuneralhome.com.