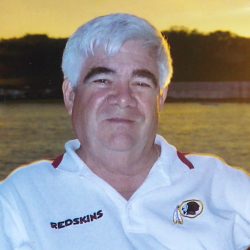 Bill was known for his generosity of time, talent, and treasure.  He was a Grand Knight at the Knights of Columbus’ Rock Creek Council and served as a parish accountant at St. Raphael’s and St. Elizabeth’s in Maryland.   He volunteered as the auditor of St. Mary’s Episcopal Church in Colonial Beach for over ten years and offered a significant gift to the church that made a purchase of adjacent land possible.  Although Immaculata Preparatory School in Washington, DC closed, Bill offered a substantial contribution in his efforts to keep it from doing so.  His priorities were God, family and to help whenever and wherever he could.

Bill attended St. Ann’s Grade School, Archbishop John Carroll High School, and the University of Notre Dame.  While obtaining his CPA, he worked at Wayne Kendrick and Company.  He then worked at Bond Beebe Accounting Firm. He became a senior partner and focused mostly on helping small businesses solve problems and receive audit and tax advice.  Although he was a consummate professional, he also believed that if you work hard you should play hard.  He established a CPA softball team, a company bowling league, an annual picnic, countless fishing trips and holiday and end of tax season parties. In 1981, he took the position as Chief Financial Officer at Chevy Chase Land Company and remained there until he retired in 2006. Bill also served as President and member of the Executive Committee of Royco Inc., the Maloney Family Real Estate Business.

Bill loved to golf with his buddies, and his one-time hole in one was more of a surprise to him than anyone else.  He enjoyed the company of family and friends, fishing, crabbing, and participating in research studies involving the preservation of oysters.  The list of stories involving Bill’s antics, quick-witted responses and sense of humor are long and numerous.

Online condolences may be expressed to Bill’s family at www.storkefuneralhome.com.  A celebration of Bill’s life will take place when Covid restrictions are lifted.   Contributions in his memory may be given to Colonial Beach, VA Rescue Squad.

As one friend declared, in agreement with Bill’s drink of choice, “He was a very fine Virginia Gentleman.”