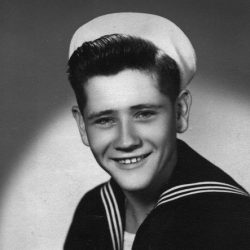 Albert John Williams (AJ), 88, of Bradenton, Florida passed away Tuesday August 11, 2020 at Blake Medical Hospital. Born March 11, 1932, in Valdese, North Carolina, he was son of the late Osborne Williams and Anne Jacumin Mullins. Mr. Williams retired as a Chief Petty Officer from the United States Navy having served in combat as a corpsman during the Korean War and conflicts in the Middle East and South America. After leaving the military, he would go on to work and retire from Phillip Morris in Richmond Virginia as a welder. Mr. Williams was a Master Mason for over forty years and a Shriners volunteer. Later in life, he would spend most of his time traveling the country, ultimately settle down in Florida where he spent his remaining years. He will be remembered mostly by his playful humor and for always having with him his inseparable canine companion, Hardly. Mr. Williams is survived by 6 children; 4 stepchildren; 16 grandchildren along with several great-grandchildren and nieces and nephews. He is also survived by his sister, Gwendolyn Williams Rozell. In addition to his wife Ann, he was predeceased by his brother, Charles Ray Memorial services will be held at Sunset Memorial Park, 2901 West Hundred Road, Chester VA. Service times will be announced at a later date.

In lieu of flowers, donations can be made in memory to Albert J. Williams to Rescue 22 Foundation (www.rescue22foundation.org) which provides lifesaving service dogs for veterans. Sign register book online www.storkefuneralhome.com.