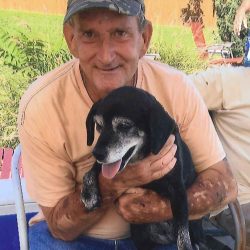 Henry Parker, 58, lifelong resident of Colonial Beach, passed away at his home on Thursday, April 18th, 2019.

Born on July 29, 1960 to Henry Parker Jr. and Gladys E. Parker, Henry was a lifelong waterman and operated Parker’s Marina in Colonial Beach with his family. He enjoyed the times he spent on the water with his fellow watermen where he made many lifelong friends. Henry was always eager to share his knowledge of the water and his experience with those who wanted to learn the ropes.

His favorite holiday was Halloween. Henry and his Dad were very well known for the Hot dog Street parties they put on for the young and young at heart each and every Halloween evening at the Marina. This tradition was started many years ago. Thru difficult times with Henry’s health, he continued this tradition every year even after his Father passed away in 2015. He was very proud of the fact that so many people looked forward to this event.

Henry was preceded in death by his Mother, Gladys E. Parker and his Father, Henry Parker Jr. He is survived by his Sister, Christina Stinnette (Mike) and his nephew, Jason of Springfield. As well as many close friends all of whom will miss him dearly.

A funeral service will be held at 11am on Thursday April 25th at the funeral home chapel in Colonial Beach. Interment will follow in the Taylor Family Cemetery.

Condolences may be left for the family at www.storkefuneralhome.com.