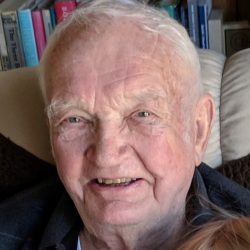 Visitation will be Saturday, March 14, 2020 from 3pm to 5pm at Storke Funeral Home, King George Chapel.

Burial will be private.

James “Jim” Edward Colvard, Ph.D, 87, of King George, VA died at home on March 10, 2020. He was born on March 16, 1932 in the hills of Robbinsville, North Carolina to the late Thomas Jefferson Colvard and Martha Evelyn Ellis Colvard.

He often joked with his family that his obituary should just be “Jim died.” But because we loved him very much, we’re going to add a few more words.  After growing up dirt poor, he attended Berea College where he met his wife Joy. He took a leave of absence from college to serve with the US Navy in the Korean War. His life was defined by service to his country, first in active duty then as a civil servant. He worked for the US Navy from coast to coast, from his first job at Naval Weapons Center, China Lake, CA to his favorite job as Technical Director at Naval Surface Warfare Center, Dahlgren, VA.

His family loved him dearly and wishes that he was still here. They would like you to know that your life is valuable. If you are currently experiencing depression, please don’t be afraid to let the people who love you help you.

Visitation will be Saturday, March 14, 2020 from 3pm to 5pm at Storke Funeral Home, King George Chapel.  Burial will be private.  Memorial donations may be made to Dahlgren Heritage Museum, P.O. Box 816, Dahlgren, VA 22448.  Online condolences may be left for the family at www.storkefuneralhome.com.