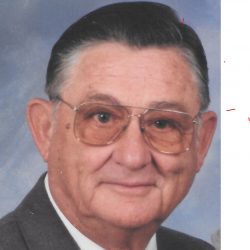 Robley Eugene Pitts, Sr., known to everyone as Rudy, passed away on November 13, 2020 at the age of 97.  He was a resident of Sunrise of Bon Air Assisted Living, in Richmond, VA for the past five years.

Rudy was married to his late wife, Alice Harrell Pitts, for over 65 years.  He is survived by his four children:  Diane Healy (Chris), Robley Pitts, Jr. (Dale), David Pitts, and Jonathan Pitts (Karen), also seven granddaughters and three grandsons as well as seven great grandchildren.  He was preceded in death by his three brothers (George, Clarence, and John Harvey Pitts) and two sisters (Mary Wright and Lucille Pitts).

Rudy was a life-long resident of Caroline County, Virginia and the owner of Alps Farm.  He was born in 1922 in the community later named Alps VA, the youngest son of Marshall and Sally Gouldin Pitts.  He attended school in Caroline county and later graduated from Fork Union Military Academy where he and his brothers all played on the baseball team.  He began farming in 1942 initially with his father’s land and growing the business until he “retired” in 1988.

Rudy served his community whenever called upon.  He was a life-long member and a retired deacon of Salem Baptist Church in Sparta.  He was proud to have been a committee member for the Caroline County ASCS for ten years.  He was a Forest Warden starting his tenure in 1954.   He also served on several committees with the Caroline County Ruritan Club. He was a 50+ year member of the Kilwinning Crosse Masonic Lodge in Bowling Green.  He was awarded several honors with the Soil Conservation, Forestry Management, and Southern States organizations.  Rudy loved being around people and was blessed by many friendships both at his home in Caroline and later in his life with the residents of Sunrise.  He loved the outdoors, developing lifelong friends with his fishing and hunting buddies.  His love of baseball never waned, watching his game on TV at any and all opportunities.

The family would like to thank all his friends and neighbors who showed their care for him is so many ways.  He truly valued the bonds he made throughout his life.

Due to the current pandemic, his life will be celebrated and remembered at a later date. A graveside service at the church will be for family only.  In lieu of flowers, donations may be made to Salem Baptist Church or St Jude Children’s Research Hospital.