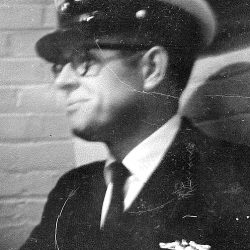 Funeral 11:00 AM on Saturday, August 31st at St. Elizabeth of Hungary Catholic Church

Edward Patrick Coffey Jr. passed away peacefully in the early morning hours of August 24, 2019 at the age of ninety-one. He was born October 25, 1927 in Dupont, PA. In 1951 Edward married the love of his life, Joann Kay. Together they raised six children, Patrick, Michael, Beth Venable (James), Nancy Cooper (Larry), Joann “Cha” Self (Howard) and Robert “Bobby”. Edward was preceded in death by his wife Joann, and his sons Patrick and Michael. Edward and Joann have nine grandchildren, Melissa (Johnston), Joann (Bowman), Zachary (Coffey), Patrick (Coffey), Bridget (Flanagan), Alexander (Cooper), Hannah (Howell), Thomas (Self), and Sean-Michael (Coffey), and thirteen great-grandchildren, a sister, Shirley Howell and several nieces and nephews. Always the adventurous type, Edward earned his pilot’s license in 1942 at the age of fifteen and then enlisted in the Navy in 1945 at the age of eighteen. He was a submariner and was able to see the world.  Edward retired from the Navy in 1970, and later worked at the Naval Surface Warfare Center, Dahlgren, VA, for a combined total of 40 years of faithful service to the Department of the Navy and the United States Government. Edward had a beautiful voice, singing in church choirs for decades. He was the director of the parish choir at St. Elizabeth Catholic Church in Colonial Beach for many years. In lieu of flowers, donations can be made to St. Elizabeth of Hungary Catholic Church’s Building Fund or Altar and Rosary Society. A funeral will be held at 11:00 AM on Saturday, August 31st at St. Elizabeth’s, with burial to follow in St. Anthony of Padua Cemetery in King George. www.storkefuneralhome.com.