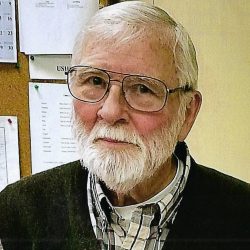 Memorial Service Will be held at a later date

Gilbert was born on March 30, 1933 in Dendron, Virginia.  He attended Elon College (BA), Radford College (MS) and pursued post graduate work at The University of Virginia.  Gilbert was a teacher in Sussex and Surry counties and teacher, principal and administrator with the Caroline County Public Schools for more than 30 years.

Gilbert served in the U.S. Army from 1957-1959 in Bamberg Germany.  He was married to Dale Nye Larkin for 54 years. He was a member of St. Asaph’s Episcopal Church in Bowling Green, Virginia where he served on the Vestry. Gilbert retired in 1988 having served 31 years in public education in Virginia.

Gilbert was a member and past president of the Caroline Historical Society. He was given their CHS Annual Award in 2017.  He was a long time member of the Bowling Green Lions Club where he served as president, secretary and treasurer, and member of the Dendron Historical Society where he received the 2014 Golden Spike Award for his many oral history contributions and newsletter publications about the Surry community.

A memorial service will be held at a later date.

In lieu of flowers, the family requests any remembrances be made in the form of a donation to St. Asaph’s Church in Bowling Green, P. O. Box 1178, Bowling Green, Virginia 22427.