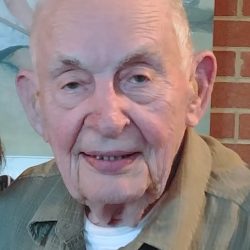 A Graveside Service at the Quantico Veteran’s Cemetery will be Wednesday, September 16 at 11am.

Born in New York, NY and raised on a tobacco farm in Cumberland Co., Howard attended VPI in the Cadet Corps and co-founder of the VIP Cave Club.  He left school in the sophomore year for the US Navy, Pacific theater and returned to Tech at the close of the war to obtain a mechanical engineering degree and the professional engineer license.  Howard serviced in Korea, 1st Marine Corps Div., 1st Batt., Chosen Reservoir, was a part of Ridge Runner rescue and received the Purple Heart. He worked a Dahlgren Naval Laboratory as a ballistic engineer, retiring in 1977.  He continued to work as a private engineer until 1995. Howard was an active member of the St. Paul’s Episcopal church for 65 years, co-founder of the Dahlgren Lions Club, and a Boy Scout leader.  Howard was heavily involved with the King George Opp Shop, founded by his wife.

Due to the COVID-19, a graveside service at the Quantico Veteran’s Cemetery will be Wednesday, September 16 at 11am.  In lieu of flowers, memorial gifts may be sent to St Paul’s Episcopal Church, 5486 St. Paul’s Rd., King George, VA 22485-5436.  Online condolences may be left for the family at www.storkefuneralhome.com