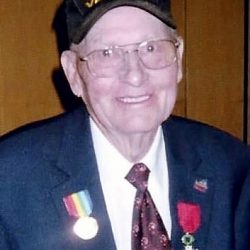 James Wilson Farmer, Sr. 92 passed away peacefully with his family by his side at the Bowling Green Health and Rehabilitation Center on September 9, 2018.

Jimmy was born on October 29, 1925 to Marshall Wilson Farmer and Myrtle Virginia Lowery Farmer in Milford VA. Jimmy was a proud U. S. Navy veteran, serving in World War II. He received many medals and citations for his service in the Navy, but his proudest medal was when he was honored as a Chevalier (Knight) of the Legion of Honor (the highest French military distinction) at the French Embassy in Washington DC. He operated Jimmy’s Texaco for 34 years, was a long time member of the Bowling Green Vol. Fire Department and Bowling Green Vol. Rescue Squad and a member of Woodmen of the World. Jimmy was a member of the Milford Hunt Club, where he enjoyed spending times with his friends. He was a member of Milford Presbyterian Church from a small child until in his 70’s, but then joined Salem Baptist Church in his later years. When he could no longer drive to Salem Baptist, he would visit Milford Presbyterian.

A funeral service will be held Wednesday, September 12th at 2:00 pm in the Bowling Green chapel of Storke Funeral Home. Burial, with Navy honors, will follow in Greenlawn Cemetery. The family will receive friends at the funeral home, one hour prior to the service. In lieu of flowers, memorial contributions may be made to Salem Baptist Church 24032 Sparta Rd. Milford VA 22514 or Milford Presbyterian Church P. O. Box 96 Milford VA 22514.