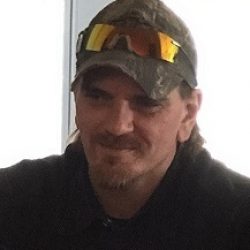 Wesley Andrew Richards, Jr, 44 of King George, VA passed away April 12, 2019 at Inova Hospital in Fairfax after a brief battle with lymphoma. Wes was born on September 29, 1974 in Roanoke, VA to Wesley A. Richards and Sandra K. Towler. He worked as a sheet metal fabricator for 20 years until his death. He enjoyed Nascar and spent many afternoons during race season having what he called “Napcar”; he loved riding dirt bikes with his son; and listening to bluegrass and hayseed dixie music.
He is survived by his loving wife of 20 years, Cyndi Richards; his son, Alex Richards; stepchildren Staci Peterson of San Antonio, TX and CJ Peterson (Erin) of Clinton, MD; his sister Crissy Boling (Joe) of King George, VA and his brother Jason Tate (Erin) of Rocky Mount, VA; his stepfather Stanley Tate, of Roanoke, VA; three grandchildren; four nieces and one nephew.
He was preceded in death by his mother, Sandra (Towler) Tate and grandparents Mabel & Garland Towler.
A memorial service will be held at 2:00 PM Saturday, April 20, 2019 at Storke Funeral Home, 11089 James Madison Parkway, King George, VA 22408. Condolences may be left for the family at www.storkefuneralhome.com.