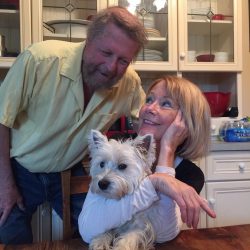 Born in Cleveland, Ohio to Frank and Lucile Hoffer, Bill moved to Maryland as a young adult. After serving in the Army as a medic during Vietnam, Bill, a gifted communicator and storyteller, returned to civilian life where he began his long and successful career as a freelance writer. In 1971 and 1975, he became a father to two daughters, Jennifer and Amanda. In 1978, he married Marilyn C. Mona. The two raised their four children in Front Royal, Virginia, and, in the late 1980s, chose Bowling Green, Virginia as their home, where they lived until their passing in 2019.

Over the course of his career as an author, Bill, joined by Marilyn, wrote countless magazine pieces for nationally renowned periodicals and more than 20 popular non-fiction books. Many of these works became New York Times bestsellers, gained international notoriety, and were chosen to become motion pictures. Titles include Midnight Express, Not Without My Daughter, His Name is Ron, and Freefall.

Bill is remembered for his brilliant mind; his written works; his side-splitting humor; his fearless risk-taking; his boundless generosity; his independent spirit; his love of fun and games; his horrible and legendary puns; and his unbending love for his wife, Marilyn, and his family.

A graveside funeral service will be held Tuesday, July 16, 2019 at 1:00 in Lakewood Cemetery, Bowling Green, with Veteran’s honors. In lieu of flowers, memorial contributions may be made to the Alzheimer’s Association or Wounded Warrior Project.