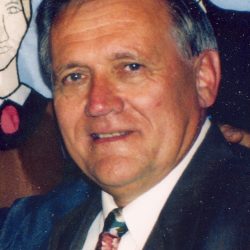 Bud attended St. Mary’s School in Norwalk, followed by Fairfield College Preparatory School in Fairfield, Connecticut.  He earned his architectural degree at the University of New Mexico School of Architecture.

Bud worked at the U.S. Naval Weapons Laboratory, Dahlgren, Virginia from 1964-1986.  He was their first architect.  Prior to working for the Navy, Bud worked at Crescent Woodwork Company in Norwalk, Connecticut; Goodman & Driscoll, Associated Architects and Engineers, Westport, Connecticut; and Kruger, Lake and Henderson, Associated Architects and Engineers, Albuquerque, New Mexico.  Upon Bud’s retirement in 1986, he joined Sally as an active partner in King George Travel.

A memorial service will be held at 3:00 PM Sunday, October 20, 2019 at St. Paul’s Episcopal Church, King George, Virginia with the Padre Lee Gandiya and The Reverend Dr. Christopher Agnew officiating.  Following interment in the parish graveyard, there will be a reception in the parish hall.

In lieu of flowers, memorial contributions may be made to: Alice Ashton Fitzhugh Fund, c/o St. Paul’s Episcopal Church, 5486 St. Pauls Church Road, King George, Virginia 22485. Condolences may be left for the family at www.storkefuneralhome.com.