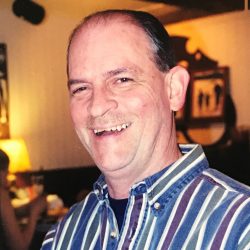 William Dawson “Sonny” Moss, 71, of Colonial Beach, VA passed away on Friday, May 22, 2020.  Sonny was a lifelong resident of Colonial Beach and a devoted and loving father, grandfather, brother, uncle and friend. He graduated in 1967 from Colonial Beach High School, where he was a star basketball player in the Cracker Box. Sonny’s love for basketball continued throughout his life, playing in local leagues, until in his forties. He enjoyed watching all sports, especially March Madness and the Triple Crown, in which many a wager was made.  Sonny enjoyed many traditions with his family and friends including birthday celebrations, Christmas (his favorite holiday), Potomac River Festival, crab feasts, fireworks, and a few cold ones.

He worked in the parts department of Jerry’s Ford, in Annandale, VA for nearly 30 years.  He then moved on to the public works department for the Town of Colonial Beach, retiring in 2015.

Sonny is survived by his daughters, Heather Brown and Dani Moss, son-in-law, Mark Brown, of Colonial Beach, and granddaughter Olivia Setliff, currently serving in the United States Navy.  His sister and brother-in-law, Beth and Joe Powell, niece Crystal Powers, and two nephews, Joey Powell and Loren Powell, and their families, of Colonial Beach.

The family will receive friends at the Storke Funeral Home in Colonial Beach Virginia, Saturday June 6th, 2020, from 3-5 p.m.  In lieu of flowers, memorial contributions may be made to the Colonial Beach Rescue Squad or the Colonial Beach Fire Department.  Online condolences may be left for the family at www.storkefuneralhome.com.