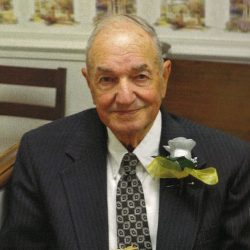 Harold A. Hayes, 87 of Ruther Glen passed away Saturday, November 9, 2019 in Bowling Green Health and Rehab Center. Born in Caroline, he was a member of Carmel Baptist Church, the widower of Anna Layne Hayes and a veteran of the United States Navy, serving during the Korean Conflict. He operated Hillcrest Garage for over 60 years and also served as a Justice of the Peace and then Magistrate for over 50 years. Harold was a Life Member of the Ladysmith Vol. Rescue Squad and also a supporter of the Caroline County Agricultural Fair.

The family will receive friends at the Bowling Green chapel of Storke Funeral Home on Monday, November 11th from 6:00 – 8:00 pm and on Tuesday, November 12th from 1:00 – 2:00 pm. A funeral service will be held on Tuesday, November 12th at 2:00 pm at the funeral home, with burial to follow in Carmel Baptist Church Cemetery. In lieu of flowers, memorial contributions may be made to Caroline Agricultural Fair, P.O. Box 1207, Ruther Glen, VA 22546 or Carmel Baptist Church Cemetery Fund, P.O. Box 52, Ruther Glen, VA 22546. Online condolences may be left for the family at www.storkefuneralhome.com.